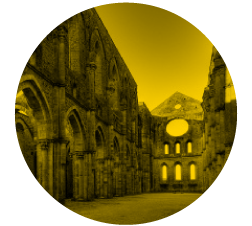 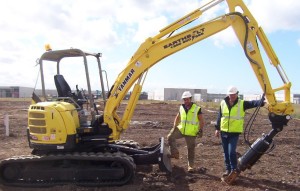 2008 Paddy & Scott on a 37 warehouse development in Sunshine West

The product we know as an Earthbolt today in the commercial construction industry harnessed old but proven technology based around helical piling or screw piling. This technology dates back to the 1830’s when an Irish Engineer named Alexander Mitchell searching for a more stable footing for tidal flats and muddy estuaries came up with the idea. When he realised the benefits of this cast iron screw pile design he patented it and in 1840 at Maplin Sounds on the Thames River mouth the first lighthouse was built using his technology. It took many years to be accepted but eventually it became the method of choice for a variety of lighthouses, harbours and pier projects. The Great Brighton Pier in Britain in the 1860’s used this technology and well over 120 years later the footings were still in place.

In over 180 years the only major change in the technology is how we install the product. In the 1800’s teams of up to 40 men on a capstan beam would wind the screw pile into the ground. Today of course with hydraulics and the geared planetary drive the speed and effectiveness of the system has been vastly improved, but the overall design principle has remained the same. The only other change has been its adaption over time to other uses in building and engineering.

In the late 1990s a very well respected commercial builder based in Victoria was working on a project. He was looking for a way to brace an anchor for a precast concrete panel where a traditional concrete footing was not an option. An idea came to him, so he contacted a local screw pile installation company and a temporary footing solution was invented. Such was his enthusiasm as a major commercial builder for the idea he told the screw pile company that maybe if you worked on the idea we could go into business.

Famous last words as they say in business. Some 18 months later he received a brochure, marketing his idea from a company affiliated to a precast panel manufacturer in Melbourne. The head office of this screw pile manufacturing company in Queensland adapted a light pole screw pile design with a top plate to accept a brace footing connection and had marketed it through the precast concrete company affiliate in Melbourne.

“The inherent problem with good ideas is the dreamer. You see something and just know it can be better.” Anon.

In early 2007 I was working as a sub-contractor to document a business plan for a company with a view to selling a 30% shareholding to the Queensland manufacturer of the product they used. The offer failed after which I was personally offered a shareholding in the business. The difficulty was really in documenting a business plan where the major weakness in the business was the product they themselves used. My view was they needed an industry specific design with themselves owning the patent for the business to be genuinely successful.

To invest in the business I set out with several engineers to design a better product for the business. The products we know as Earthbolt Mk 1 to 4 were born on a series of 6 whiteboards in a garage in Berwick, Victoria. These eventuated into a several working prototypes that were tested. Basically it all started in a shed; but essentially the knowledge of several inspired professionals designed what we now use being the safest and strongest propping anchor available to the precast concrete panel industry.

Such is life, and in business the game plan was altered without notice and investing in the entity was no longer a possibility. Thus I was left with a tested and highly effective product design. At first I set about selling the patented design to repay my considerable outlay invested in the product after the inducement as a shareholder fell through. During this period I flew to Sydney initially looking for someone to buy the Earthbolt design but ended up meeting a real character with 45 years in the construction industry who inspired me to take the leap and develop it commercially.

There are many people that went into inspiring and designing the Earthbolt product. But I would like to acknowledge Joe Scerri and David Reid for their expertise and assistance in the design of the system. With less than perfect timing starting a fledgling business not too long before what we now refer to as the Global Financial Crisis we proved absolutely that what we had designed was a winner in that it marketed itself via word of mouth and when times were tough in construction being economical and efficient was an absolute necessity.

Several prominent builders and precast concrete panel manufacturers not only gave invaluable advice along the way during its design and testing but supported the product commercially. These people know who they are and we will always acknowledge their assistance. To the Worksafe representatives in Victoria and NSW who also not only offered constructive advice but actively promoted our product as a safer alternative to in-situ concrete footings that they felt were inadequate in many instances, we thank you for your ongoing support.

From a great idea Earthbolts business plan has always been to focus on bringing the safest and most cost effective precast anchoring system to all the market place. We always recognised that pricing was crucial thus the business had to focus on volume to ensure pricing brought this safety anchor system to everyone. We set out to be the benchmark and today we can say more concrete panels are safely supported by an Earthbolt than any other alternative pile product in Australia.

So we started in a garage trying to make a good concept better. That was our vision and passion and we did it. To all our loyal clients for making Earthbolt a success we thank you as we continue as always delivering the best customer service to you as an independent company in today’s commercial construction industry.

“We make it happen.”

Back to Our Product